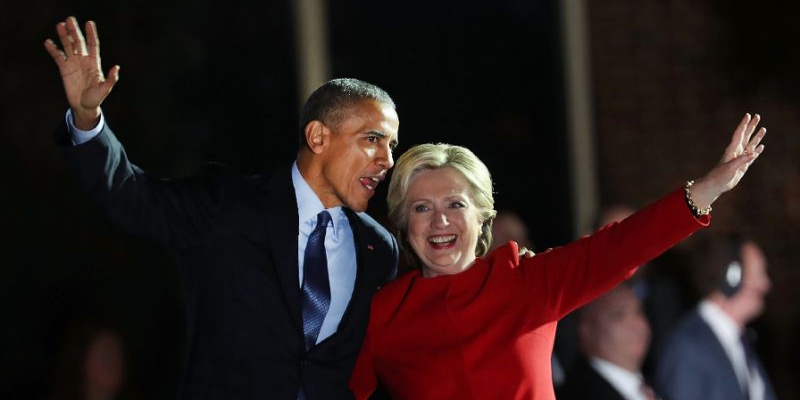 Suspected explosive devices were sent to former president Barack Obama , defeated presidential nominee Hillary Clinton and to a building housing
CNN ‘ s New York bureau less than 24 hours apart and less than two weeks before key US midterm elections , officials confirmed Wednesday .
The targeted Democrats are among the most high -profile political figures in the United States , which goes to the polls on November 6 in elections seen as a referendum on Republican President Donald Trump .
CNN has distinguished itself in the last two years for its aggressive coverage of the Trump administration and robust criticism of the Republican, who replaced Obama and defeated Clinton in the 2016 election.
The Secret Service recovered a package addressed to Clinton in Westchester , a suburb north of Manhattan on Tuesday , and a second package addressed to the Obama residence in Washington on Wednesday .
CNN evacuated its New York bureau Wednesday after a suspicious device , which police described as a metal pipe with wires , was found in the mailroom of the Time Warner Center .
The White House swiftly condemned what it called “despicable ” acts targeting the two Democrat luminaries .
“These terrorizing acts are despicable , and anyone responsible will be held accountable to the fullest extent of the law , ” said Press Secretary Sarah Sanders .
“The United States Secret Service and other law enforcement agencies are investigating and will take all appropriate actions to protect anyone threatened by these cowards . ”
– Metal pipe with wires –
The precise contents of the suspicious packages sent to Clinton and Obama were not immediately clear . There has been no claim of responsibility and no one was yet thought to have been arrested .
The Secret Service said the packages were “immediately identified during routine mail screening procedures as potential explosive devices and were appropriately handled as such. ”
“The protectees did not receive the packages nor were they at risk of receiving them , ” it added .
New York police confirmed to AFP that its officers had been called to the Time Warner Center , where the
CNN bureau in the US financial capital is located, to investigate reports of a suspicious package .
Police later identified the CNN package as a “suspicious device described as a metal pipe with wires , ” and confirmed that its emergency service unit and bomb squad were on the scene , in a crowded part of Midtown Manhattan.
The Secret Service, which provides protection to current and former US presidents and their families — Clinton is the wife of former president Bill Clinton — said it had initiated a “ full scope criminal investigation . ”
The investigation would “ leverage all available federal , state , and local resources” to determine the source of the packages and identify those responsible , it said .
It was not immediately clear whether Clinton or Obama , who has kept a family base in Washington after leaving office so that his youngest daughter can finish high school , were at home when the packages were found .
The FBI ’ s field office in New York said it was “ aware ” of a suspicious package found in the vicinity” of Clinton ’ s home in Chappaqua and that its Joint Terrorism Task Force was investigating.
– Target for right – wingers –
The incidents come just days after an explosive device was found in the mailbox at the New York home of US billionaire and liberal donor George Soros , a target of right – wing groups .
An employee of the residence in Bedford , New York, an ultra – wealthy enclave not far from the Clintons ’ home in Westchester County , found the package in the mailbox on Monday . It was later defused by bomb squad technicians .
The New York Times reported that the latest packages were all similar to that found at the Soros estate .
Born in Hungary , the 88 – year- old hedge fund tycoon is one of the world ’ s richest men with an estimated net worth of $ 8 . 3 billion and a prominent philanthropist who has become a hate figure for right – wing groups .
Soros supported Clinton , Trump ’ s rival in the 2016 US presidential election, and has been accused by nationalists the world over of sponsoring protests and seeking to push a liberal , multicultural agenda.
His Open Society Foundations on Tuesday condemned the “ hateful rhetoric that dominates politics in the United States and so many countries around the world , ” noting it “ breeds extremism and violence .
“In this climate of fear , falsehoods, and rising authoritarianism, just voicing your views can draw death threats , ” it said .
Earlier this month , Trump accused Soros of paying demonstrators to protest against the nomination of Supreme Court Justice Brett Kavanaugh , who was accused of attempted rape in high school .
Soros has also been falsely accused of funding the caravan of migrants moving north from Honduras through Mexico en route to the US border.