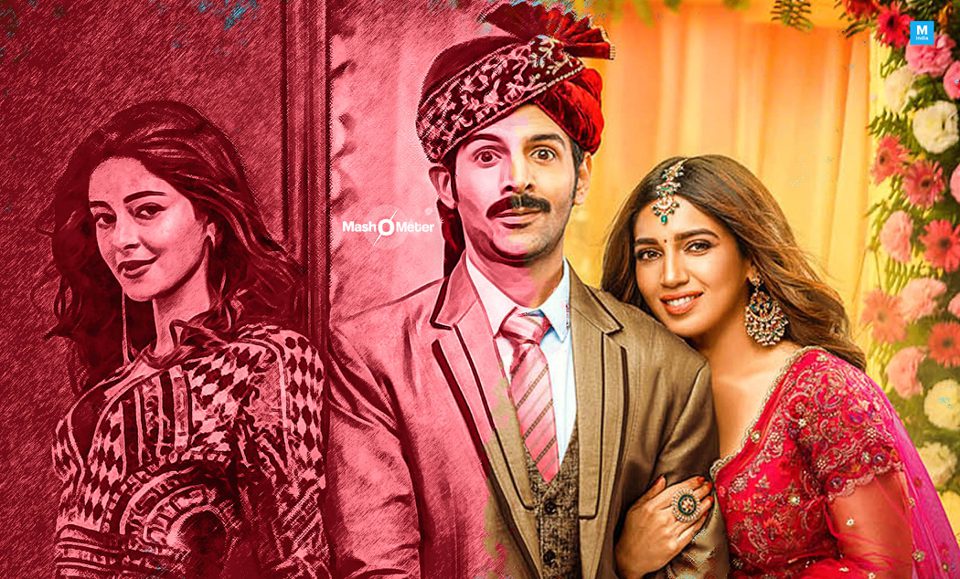 You’ve seen it all before. The charming small-town, home to a cool spunky girl, a guy who graduated just in time to get his parents talking about marriage and his childhood best friend. It has the same atmosphere of movies off-late, set in Kanpur and Lucknow with a mainstream cast of new-age Bollywood’s Bhumi Pednekar, Kartik Aryan and Ananya Panday. With a star kid and an overrated actor capitalizing on Pyaar Ka Punchnama, you have your average hindi cinema-goer’s excuse to go watch a “new” movie. Well, at least that’s what they’re calling it. Pati Patni Aur Woh, written by Mudassar Aziz, runs on the 1978 film’s template and tries to give it some patchwork. Should we care?

Abhinav Tyagi (Kartik Aryan) is the average guy tossed into the marriage market with Vedika Tripathi (Bhumi Pednekar) and his lack of agency and her willingness to try “restriction” instead of rebellion (coupled with her appetite for sex) the two become Pati Aur Patni. They have a few years of fun in them till they tire of each other. This is where the Woh, Tapasya (Ananya Panday) enters with a questionable booty shot because of course and is spotted by Tyagi’s wandering eyes. His attraction for her becomes the catalyst for marital problems, affairs and rife foundation for sexist jokes. Would it help if I mentioned her tells her that his wife is having an affair to sell a sob story and make himself available to her?

Kartik Aryan known for his sexist monologues is trying real hard to keep up with his rep, keep up with his wife (who happens to be way cooler than he is) and keep his reputation clean as the privileged upper-middle-class guy in this movie. Pati Patni Aur Woh wants to sell you a victimized bechara Kartik Aryan all over again. Poor guy, he has no control over his adulterous tendencies, he has no regard for his wife who wants to move to a better city and he has absolutely no cares to give his friend Fahim played by a sorely misused Aparshakti Khuranna.

Rajat has come a long way from Mumbai to play Chintu Tyagi. This transition is accompanied by a moustache, a wardrobe change and the most annoying smile (sidenote: where is his upper lip in this film? It looks like it’s been turned inside out). A few minutes into the film, our story’s Pati might have just said his opening lines and I was already annoyed. I knew he won’t have a single good thing to say throughout the 2.8 hr runtime and I was right only to be proved wrong when he started monologuing again. Things got so much worse.

The problem with Pati Patni Aur Woh is that it thinks the woke movie-goer won’t notice the outdated arcs it’s selling. Vedika after choosing to be domesticated for her new husband and dubbed adulterous finds out about his affair. Later in the film, she is given the agency and means to walk out. It is here that she meets a man from her past (and is probably judged by the uncles and aunties who were laughing at sexist jokes at the screening I was at) and thus begins an all-new chapter of messed up. Even with the reworked marital monologue, it’s still pretty misogynistic. The story tries to subvert the problematic gender stereotypes of first, the temptress and the wayward woman but, ends up reinforcing them. It is all done to make the hero look good, who by the way, is the whiniest guy, still upset about his ex-girlfriend who dumped him unceremoniously. The film gives her the role of a fickle woman and criticises even an off-camera plot device, imagine what it does with the women on the screen!

All the focus is placed on the man’s plight with dialogues like “sabse barbaad pati hi hota hai” and “aashiq kuch bhi kar sakta hai” (we’ll come back to this line later). Let’s get one thing straight, Abhinav has practically no problems. His trials are highlighted only at the cost of making the women look bad. Coming to the main problem of the movie-

Saving women for collateral damage in the Pati’s story

While he is carrying on his extramarital tryst we see Tapasya play the dimwit, the city girl trapped by the charms of a simple guy. And somehow the movie wants to convince you that Abhinav still is that naive, nice guy caught between two women who are just two problems in his life. They have no other function than to bring out the boyish lover, the adoring husband, the depressed aashiq and the righteous guy in him. Tyagi is none of these things but the film wants so desperately for you to believe it that it makes villains out of its female characters. Tapasya is particularly ill-used as she’s given the job of seducing a married man since she’s unattached and then aiding the couple’s getting back together plan. Vedika too is equally eager to win her loser husband back and spend even more emotional labour than she already has.

As if that wasn’t enough, there are sequences that see the women doing things for themselves but, even these are on a stencil of pleasing the man. Tapasya changes into desi attire in no time to meet the guy’s parents and Vedika gets into a western outfit for her big walk out of marital shackles (saree-wearing women are too sanskari to do that na?). By twisting traditionality and modernity, the film reinstigates the idea of a man wanting both, the girl who will take him to a club and dance to that annoying ‘Dheeme Dheeme’ song and the one who will settle for the Kanpur life where he chills with his homie and cribs about the injustice he’s being dealt with. The women in his film are used merely to supplicate the hero who progressively becomes a worse human being. The problem is that the audience I watched in the company of didn’t see that judging from the uproarious laughter and some clapping at what I can only describe as lazy dialogue writing.

And it’s so boring!

More than watching it through the layered lens of Pati Patni Aur Woh conforming under the guise of a non-conformist film, you’ll see how utterly plain it is. The comedy-drama has absolutely nothing new to offer. It is the same old story dragged along for over two hours and by intermission, you’ll be vying for the climax and the sweet relief of getting out of the auditorium. Halfway into the run-time and I was already eyeing the exit signs prominently placed right under the screen. So tempting!

This film has all the regressive comedy tropes, the idea of a man trapped in marriage, lured by a temptress and the hilarity that comes from hiding his affair. It’s exactly what you’d find in an episode of The Kapil Sharma Show. Run-off-the-mill lines, puns that are done to death and humour straight from the 70s. This movie is nothing of the patchwork it promises its predecessor. If anything, it furthers that agenda and adds the “aashiq kuch bhi kar sakta hai” line in a time when Kabir Singh is a thing!

If you want to travel back to everything that was wrong with 1978 India go ahead, watch the movie and try not to be immediately pissed off by Kartik Aaryan’s new excuse to monologue. It’ll be as impossible as feeling sorry for bechara Chintu Tyagi.