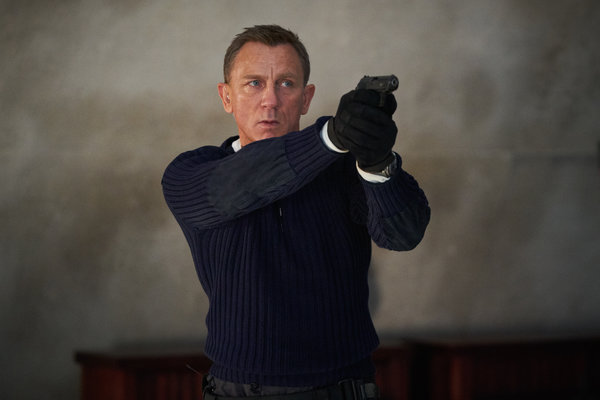 The new James Bond movie may be called “No Time to Die,” but judging by the first trailer for the film, which was co-written by Phoebe Waller-Bridge (“Killing Eve” and “Fleabag”), a more apt title might be “Time’s Up.”
Following “Spectre” in 2015, the first post-#MeToo Bond adventure introduces Daniel Craig’s character to a female fellow agent, played by Lashana Lynch (“Captain Marvel”). “The world has moved on, Commander Bond,” she informs him. “Stay in your lane.”
The two spies form an uneasy alliance as they’re recruited to take down a megalomaniac (the “Bohemian Rhapsody” Oscar winner Rami Malek ), who has a scarred face and wears a “Phantom of the Opera”-like mask.
Several familiar faces pop up in the trailer, including Bond’s MI6 comrades M (Ralph Fiennes), Q (Ben Whishaw) and Moneypenny (Naomie Harris) as well as C.I.A. field officer Felix Leiter (Jeffrey Wright). Christoph Waltz returns as the supervillain Ernst Blofeld, only this time he’s imprisoned, à la Hannibal Lecter in “The Silence of the Lambs.”
There are also plenty of explosions, chase scenes and new gadgets — Bond’s Aston Martin now features Gatling guns that pop out of its headlights. Plus, the signature catchphrases “Bond, James Bond” and “license to kill” are heard in the clip.
Directed by Cary Joji Fukunaga (“True Detective”), “No Time to Die” will be released in American theaters on April 10.