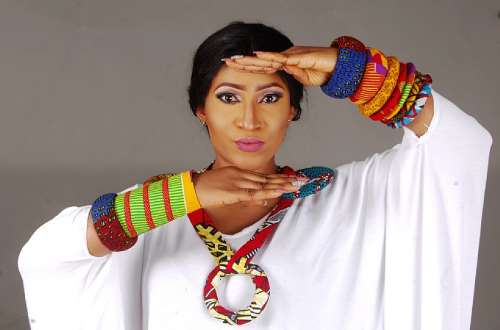 Kemi Stone is an actress, producer and model. In this interview with Yetunde Oladeinde, she opens up on life as an actress, inspiration, initial challenges and more.

TellL us how you got into acting?

I have always had a passion for acting and gradually I began to develop my skills for this. This passion led me to PEFTI film school where I learnt a lot of this and got the necessary skills and knowledge needed.

In addition, I also got interested in modeling and started going for modeling casting.

Interestingly, it was a  friend that  I met during one of the  casting sessions that invited me for acting auditions and that took  me to another phase in my  life and career.

However, I must say that it wasn’t so easy at the beginning. I went for several auditions and I got tired at a point and felt like quitting.

Luckily, it was at this stage that the much awaited opportunity came.

On that fateful day, I followed a big sister who supplied office stationary to Opa Williams office for some transactions.  While I was sitting at the reception looking young and innocent in my koroba hair style, someone just ask me how old I was.

I was surprised and before I could recover from that, he asked another question.

I told him, and then he asked can you act? I replied saying, I love to act. He then called his secretary to give me a script and I got cracking.  My performance was impressive and he was impressed.

That was how I got a major role in the soap opera titled “Living next To you”. It was a memorable experience and I acted with people like Sunkanmi  Omobolanle, Kiki Omeli and  other popular actors in the sector.

It was also a very exciting period in my career and I was amazed at the pay then. The amount I was paid for the role was 250 thousand naira and I just can’t forget it because is still remains my highest paid job in my movie and acting journey

I must say that all the roles that I have struggled for, attending  the auditions and putting in so much efforts didn’t even pay me that much..

Going down memory lane, I would say that it’s been an awesome journey so far. It’s been really good, filled with fun and amazing moments. Of course, there are the flipside too and there were also moments that were quite disappointing.

Like the good memories, this experience also continues to linger and I can never forget it. I also remember how I was auditioned for a movie, I got a call back and I was very excited.

I was later told to come for costume check and I did. They asked me to come the next day and I looked forward to the following day all night. When I got there, I was so happy to see this top film maker at the venue. He was actually someone that I admired so much.

I love his movies and he inspired me a lot and I actually had great expectations from the event.  Unfortunately, all the hope’s I had that day was dashed. Instead of encouraging me as a young up and coming artiste, he said to me “sorry you can’t work with me. Reason: ‘ You are too light skinned. Maybe, you should go and work with all those Igbo boys producing movies”.

It was one of my lowest moments.  I felt very sad that this was coming from someone that I looked up to with great disappointment.

What were you doing before this?

I was just a little girl who had big dreams and aspirations.  I knew what I wanted and was determined to get it.

At that point, I was studying for a Diploma in Law at the Lagos State University (LASU), Ojo campus. I also went to the Pencil Film Institute about the same time,

It was a very interesting period in my life and I was doing a number of things like going for commercial modeling jobs, making beaded jewelries amongst other things.

What does being in the sector mean to you?

It’s been really good and I must say that I have enjoyed every moment on the job. So, this actually means a lot to me, I would also say that being in the sector gives me the opportunity to express myself.

What are the challenges you

Encountered during the COVID-19 pandemic?

For a lot of people, the lockdown which happened last year was unexpected, difficult and filled with lots of surprises. I t actually made life harder and changed a lot of plans. I remember that it disrupted my movie production and I had to redirect my energy positively.

Also at that point, I had just bought new items of clothing in my store and the stock was very exciting. My plan was to sell them quickly and move on to other things.

Everything was actually on hold. It was really tough because you know that Nigeria is a country where a lot of people work and make money on a daily basis.

So, if you don’t work hunger is certain and there would be a lot of confusion. Even if you work in an office, you will expect money at the end of the month but if there is no work for your company how do you expect them to pay you. It was really tough but we thank God things are getting better now.

What are some of the memorable moments in your life and career?

I also love travelling and I also recall that the first day I step inside the airplane was memorable. I didn’t know how to buckle the seat belt and I didn’t want to ask anyone. While I was struggling with the belt I noticed that the flight attendant was laughing at me.  Also memorable was when I finally released my latest movie titled Kemi Olode (the hunter)

What has been the experience as a producer?

Life as a producer has been awesome and I am always happy when I produce my own movie. I usually give myself the opportunity to get a better role as an actor. It has also been worthwhile because of a number of things such as being able to raise funds, getting the appropriate director and cast for the movie, post production and also getting money invested back.

What inspires and motivates the things you do?

There are so many things around us that inspire and motivate one on a daily basis. Also, if you look around in the country today, you find that the ongoing drama is a major motivation for anybody aspiring to be great in life or in the sector.

Every day in the streets, in the social media and everywhere there is inspiration to do something. So, I would say that my environment is the greatest source of motivation for me.

Who or what do you consider as the greatest influence in your life?

The word of God guides me in the right path. It is the basic foundation for me and this ultimately leads me to so many things,

I also learn from Toyin Lawani because I can relate with her. I love her so much, her energy, talent, consistency is a big influence for me.

What advice do you have for young people who want to go into the sector?

Young people must be determined focus and never give up on their dreams. You must have it at the back of your mind that it is not going to be easy but it will be worth fighting for at the end of the day.

Always follow your dreams and never give up. Even if a lot of people look down on you that is not enough to lose focus.  Nobody will believe in you, except you believe in yourself. As a matter of fact, there would be lot of discouragement on your way to success. Some people would tell you, you can’t make it but it is very important to believe in yourself and pray to God.

How would you assess Nigerian youths today?

I believe very strongly in the average Nigerian youth. They are energetic, creative and the much needed leaders of tomorrow.

What plans do you have for the future?

One of my major plans is to work hard and become a household name. This is important so that I no longer have to introduce myself. I also want to be happy and have my own family.

How do you relax?

I relax by surfing the internet and listening to good music.

What is your definition of style?

For me, style is what you want to be identified with and it actually defines your personality. I see style as something unique, stylish as well as what brings out the real you.