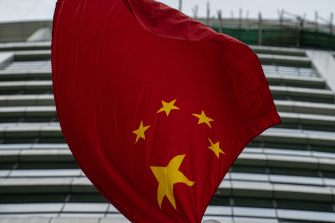 HK legislators in protest against arrest of fleeing activists

Hong Kong: Pro-democracy Hong Kong politicians staged a brief protest in the city’s legislature on Friday to call for the release of 12 activists arrested by Chinese authorities at sea last month as they tried to flee to Taiwan by boat.

Chinese police have said the 12, who are all suspected of crimes in Hong Kong related to anti-government protests that erupted last year, were suspected of illegal border crossing. China’s foreign ministry has called them “separatists”.

Their detention in the south Chinese city of Shenzhen has become a lightning rod for criticism of Hong Kong’s Beijing-backed government.

About a dozen opposition members of the city’s legislature surrounded Chief Secretary Matthew Cheung before a meeting on mitigating the economic impact of the coronavirus, and demanded he meet the detainees’ families and try to bring them back.

“Release the 12 Hong Kongers immediately,” the politicians shouted, while holding up placards with the same message and delaying the start of the session.

The failed bid by the 12 to flee to self-ruled Taiwan has highlighted the fears that many people feel in semi-autonomous Hong Kong about what they see as China’s determination to end any push for greater democracy in the financial hub.

Hong Kong’s government has said it can not interfere on their behalf and they must face legal proceedings in China before they can come home, though it says it is willing to provide “feasible” assistance to their families.

“They were fugitives who committed serious crimes, skipped bail, violated laws in mainland waters,” Cheung said before leaving the room.

“The immigration department and security bureau are the professional department to handle the matters. Senior management will continue to pay attention to the incident.”

China’s legal system is controlled by and loyal to the ruling Communist Party, meaning courts do not usually challenge party or government accusations.

Mainland authorities have said the legitimate rights of the 12 were being protected according to the law.