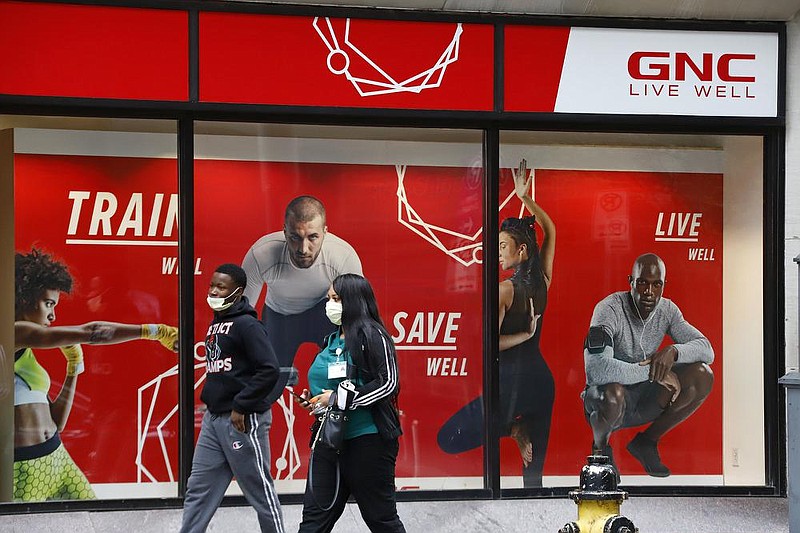 GNC Holdings, headquartered in Pittsburgh, filed for Chapter 11 bankruptcy this week and is planning store closings, including six in Arkansas. (AP)

Vitamin and nutrition chain GNC Holdings filed for Chapter 11 bankruptcy this week, with plans to close up to 1,200 of its 5,200 U.S. stores, including six in Arkansas, as it searches for a buyer.

GNC — General Nutrition Centers — has struggled for years to shore up sales as it tried to pay back more than $900 million in debt. Then came the coronavirus pandemic, which forced it to shutter about 40% of its stores, leading to millions in lost revenue. The company reported a $200 million loss during the first quarter of this year and last month warned that some of the company’s temporary closures could soon turn permanent.

Arkansas stores on the closing list are at Benton Commons in Benton, The Mall at Turtle Creek in Jonesboro, North Park Village in Monticello, Northwest Arkansas Plaza in Fayetteville and Park Plaza in Little Rock, according to the GNC website.

The company’s bankruptcy filing Tuesday comes days after it paid nearly $4 million in cash bonuses to top executives, including Chief Executive Officer Kenneth Martindale, who received $2.2 million. Four other executives, including the company’s chief financial officer and chief human resource officer, received a combined $1.7 billion in bonuses, according to company documents filed with the Securities and Exchange Commission on Wednesday.

The bonuses were paid out on June 18. Executives will have to pay back 25% of their bonuses if the company does not emerge from bankruptcy within a year, according to the filing.

The chain is the sixth major U.S. retailer to file for bankruptcy protection during the covid-19 pandemic, which has already led to thousands of permanent store closures and billions in lost sales across the industry.

In its bankruptcy filing in U.S. Bankruptcy Court in Delaware, GNC said it had both assets and liabilities between $1 billion and $10 billion. Annual revenue fell 12% last year to $2.07 billion. GNC has 5,200 U.S. stores, as well as 1,600 pop-ups at Rite Aid pharmacies.

GNC began the bankruptcy process with a potential buyer and agreement in principal with an affiliate of its largest shareholder, China-based Harbin Pharmaceutical Group Holding Co., the company said. Harbin and other potential co-investors will serve as a so-called stalking-horse bidder of the company’s assets in a court-supervised sale process, according to filings.

The agreement sets an initial bidding price of $760 million for GNC, subject to a bankruptcy judge’s approval. A higher bid may be presented and accepted, and would be implemented instead of just the standalone plan transaction, according to the company. It also includes support from its largest vendor and joint venture partner, International Vitamin Corp.

Lenders also provided $130 million in additional liquidity to financially support the company through its proposed restructuring.

With the support of its lenders and stakeholders, GNC expects to confirm a standalone plan of reorganization or complete a sale that will allow the business to exit from its restructuring process by the fall. GNC’s U.S. and international franchise partners and its corporate operations in Ireland, which are separate legal entities, aren’t part of the bankruptcy.

The turnaround will be complicated by the retail industry’s temporary shutdown of stores to help stop the spread of covid-19. That has been partially offset by the company’s e-commerce operations, whose sales increased 25% in the first quarter.

Martindale has led the company since September 2017. The former head of Rite Aid Stores was brought in more than a year after the abrupt exit of former CEO Michael Archbold amid falling revenue and a strategic review that included the debt load and a potential sale of the company. Martindale failed to arrest the revenue decline, and this year’s first quarter included a $200 million net loss.