Brooke Nevils, a former NBC News employee, is alleging that former Today co-anchor Matt Lauer raped her in his hotel room at the 2014 Sochi Olympics.

In Variety‘s copy of Ronan Farrow‘s new book, Catch and Kill: Lies, Spies, and a Conspiracy to Protect Predators, Nevils describes the incident in detail and reveals that she reported the encounter to NBC afterward. In 2017, the network fired Lauer from his position on Today. At the time, Nevils’ identity was kept anonymous at her request; this is the first time the full details of her allegations have been made public.

PEOPLE is out to Nevils and Lauer for comment. Lauer denied raping Nevils in a lengthy letter to Variety, saying he had an “extramarital, but consensual, sexual encounter” with her.

RELATED: Everything We Know About the Allegations Against Matt Lauer

According to an interview she conducted with Arts & Sciences Magazine while she still worked at NBC, Nevils, a Missouri native, graduated from John’s Hopkins University in 2007 with a double major in political science and the Writing Seminars. After college, she began her career as a page for NBC at 30 Rockefeller Plaza in New York City.

As a page, Nevil’s job was to greet the celebrity guests and get them to the set on time for their interview. Her most memorable day on the job, as she explains in her interview, came when Robert De Niro arrived on set.

Nevils recalled that De Niro’s manager told her that the Oscar winner’s wallet had been left in the cab: “I can’t leave Bobby, you gotta get it back for me,” said. After making nonstop calls and tracking down countless cabs, Nevils managed to recover De Niro’s wallet.

After her position as a page expired, Nevils moved onto a 10-month post as personal assistant to Today Show host Meredith Vieira. Her daily tasks were to fetch lunch and run errands, as well as gather research for the famous journalist and help her prep for interviews.

My awesome producer @BrookeNevils goes through props for my segment backstage at The @MeredithVieira Show! 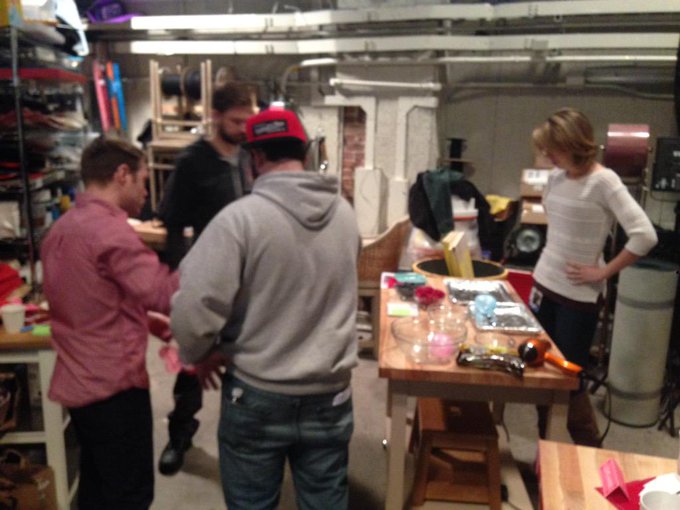 “It was a great learning experience,” Nevils recalled of her time working for Vieira, which allowed her to meet many public figures, including George Clooney, Leonardo DiCaprio, Barbra Streisand and many of the major players in the 2008 presidential race.

“You never know what you’re going to be doing, ever,” she said of the job. Nevils explained that she wouldn’t receive a byline for her stories, but rather a quick flash of her name at the end of the NBC broadcast ever year.

“At the end of the day what’s most important to me is that my work gets seen and that it makes a difference to the people who watch it —that it informs them, makes them laugh, or gives them something to talk about with their moms,” she told the magazine at the time.

RELATED: Savannah Guthrie and Hoda Kotb Are ‘Disturbed to Our Core’ over Matt Lauer Rape Allegation

In 2014, her career also reached a new high. As the assistant producer for A Leap of Faith: A Meredith Vieira Special, Nevils was nominated for an Emmy award for outstanding feature story in a news magazine, along with the rest of the production team.

Nevils is also billed as a producer on several high-profile shows for NBC including Headliners, 90 Day Fiancé: Happily Ever After? and Royal Wedding Watch.

As Nevils recounts in her interview with Farrow in his new book, out Oct. 15, she attended the 2014 Sochi Olympics, along with Lauer, 61, according to Variety.

In Nevils’ account, according to Variety, she was tasked in Sochi with working with Vieira, who’d been brought back to the show to do Olympics coverage, and they ran into Lauer at the hotel bar one night.

At the end of the night, Nevils, who’d had six shots of vodka, ended up going to Lauer’s hotel room twice — once to retrieve her press credential, which Lauer had taken as a joke, and the second time because he invited her back, she says in the book, according to Variety.

Nevils says in the book that she had more sexual encounters with Lauer back in New York City, according to Variety, telling Farrow: “It was completely transactional. It was not a relationship.”

At Vieira’s urging, Nevils reported her ordeal to NBC executives in the fall of 2017, in the wake of the Harvey Weinstein scandal, Variety reports. Lauer was fired, Nevils went on medical leave in 2018 and was eventually paid, Farrow writes, according to Variety, “seven figures.”

PEOPLE is out to reps for Vieira and Farrow.