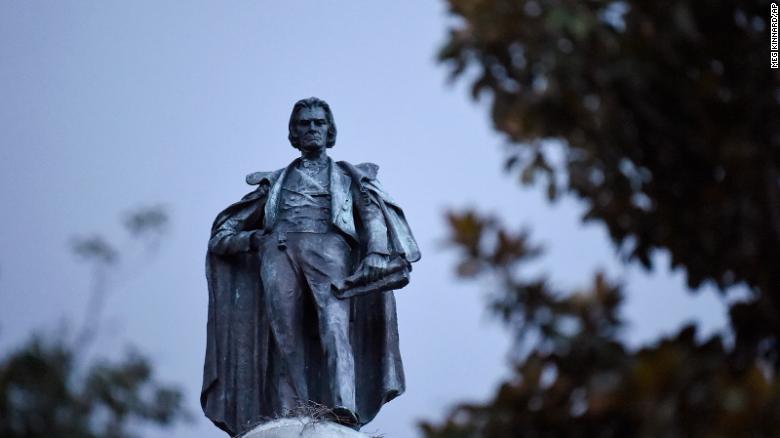 A monument to former U.S. vice president and slavery advocate John C. Calhoun towers over a downtown square in Charleston.

(CNN)Crews in Charleston, South Carolina, on Wednesday removed a statue of politician John C. Calhoun from its tall pedestal in Marion Square.

The operation took most of the day, with the statue lowered to the ground amid cheers shortly after 5 p.m. ET.
Calhoun, a former vice president of the United States and US senator, is known for defending slavery and owning about 80 slaves himself. A Clemson University biography called him an ardent believer in white supremacy.
Statues controversial because of their connection to racial injustice and slavery have been removed by both protesters and cities in the wake of the death of George Floyd, a 46-year-old Black man who died in police custody in Minneapolis.
But conversations around those monuments, particularly Confederate monuments, have been the subject of national debate for years.
close dialog 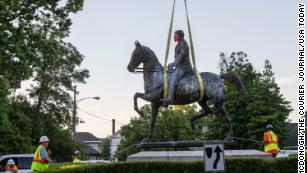 Confederate statues are coming down following George Floyd’s death. Here’s what we know
Charleston City Council voted unanimously to approve a resolution for the removal on Tuesday night, according to CNN affiliate WCSC.
“We have a sense of unity moving forward for racial conciliation and for unity in this city,” Mayor John Tecklenburg said following the vote, the station reported. “God bless you all.”
The meeting, with comments from members of the council and public, lasted two hours before the decision was reached, the station reported.
Council member Peter Shahid said it was time for the statue to be replaced with symbols of unity, the station reported. “The statue has served as a symbol of division in our community and we don’t need that,” he said. “We need symbols that unite us, that bring us together not tear us apart.”
Before removal, the city had to determine if it owned the statue and could legally remove it, the station reported. 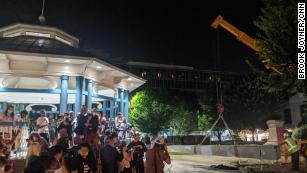 A controversial Confederate monument goes down in the Atlanta suburb of Decatur
Crews in Raleigh, North Carolina, began removing a 75-foot tall statue of a Confederate soldier from government property beginning Sunday, according to CNN affiliate WRAL.
A part of the monument base was removed by crane early Wednesday.
The removal began after Gov. Roy Cooper ordered the removal of Confederate monuments on state grounds following nights of protests. Cooper said the order was to protect against the dangers of individuals toppling the statues themselves and breaking out into clashes, the station reported.