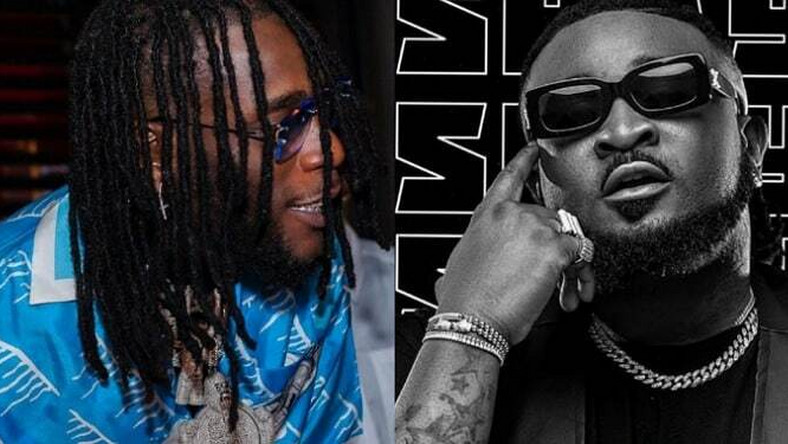 On March 27, 2020, Grammy nominated Nigerian superstar, Burna Boy took to his Twitter to voice his frustration at being stuck in Nigeria, losing money and being bored from coronavirus-initiated self-isolation. Four days later on March 31, 2020, he took to his Twitter page and engaged a questions and answers session with fans on the social media platform.

Meanwhile, hours earlier, Twitter account, @antigravitylite took to her page and posted a conversation Aristokrat Records act, Ceeza Milli had at City FM. During the conversation, Ceeza Milli claimed he wrote 2018 smash hit, ‘On The Low’ for Burna Boy. After being asked if he had written for Burna Boy, he replied by singing the hook to ‘On The Low.’

When the host then probed further, he nodded in the affirmative and said he wrote, “Most of it (the song).” When @antigravitylite posted the story, she wrote, “Wow just knowing Ceeza Milli wrote on the low for our African giant burna boy. Dude is good. I pray his music blows too.”

Burna Boy then went to seek the story out and wrote in a since deleted tweet that, “I asked this spineless liar if he ever said this and he said, “No, I never said that.” @ceezamilli, just pray corona virus catches you before I do cuz when you know what it is when I catch you.”

After the tweet was deleted, Burna Boy tweeted and apologized for its tone. He wrote, “Your right bro. I overreacted there. But he definitely deserves a few Slaps for that tho, Regardless, my apologies to everyone for overreacting it wasn’t called for.’

This was after a Twitter user, @Oshoma quoted a screenshot of Burna Boy‘s threat to Ceeza Milli with, “God forbid anything happens to that boy. See verified evidence. How do you, in all ur wisdom and grandeur, issue a threat as this in broad day twitter? Common maan @burnaboy, u bigger than all of this. Really !”

In a series of messages, Ceeza Milli took to his Instagram stories and wrote the following about how he basically wrote the intro to the song during a writing camp.

After that, Piriye Isokrari, the CEO of Aristokrat Records to which Ceeza Milli is signed took to his Twitter page @peedipiccasso and wrote that, “To set the record straight @ar_records did not have any label execs present at the session that “On The Low” was written or recorded. While a gifted songwriter @ceezamilli was not engaged to write nor did he write “On The Low”.

Burna Boy has since taken to his Twitter page to express his pain at how Nigerians never judge him fairly. In three tweets, Burna Boy wrote that, “If what Nigerian twitter said about me had any effect on me then I would be dead by now. There’s even a Yoruba saying that translates, “He who says the truth won’t even find a mat to sleep on”. Well I’ve proved that to be WRONG. You can’t take nothing from me.

“This is my last personal tweet ever. Imma just leave this app cuz apparently I’m too real for it. Everyone please use this COV-19 times to really find out what your true purpose in this world is, train your mind and body to the fullest, get closer to the most high n ur family.

“Find out who is truly for you and who is really your enemy. Let conscience and confidence lead you all as it has lead me all my Life. Peace and Love.”

What does it all mean?

It’s a complicated issue with a few moving parts; the first is how Burna Boy had a right to rant at Ceeza Milli and the second is how we need to stop shaming superstars for using songwriters to avoid bigger issues of underdevelopment of our industry and more situations like this one.

Burna Boy had a right to be angry and even livid

Burna Boy had a right to rant at Ceeza Milli, but threatening Ceeza Milli was excessive. Burna Boy needs too learn to control his emotions. He’s a superstar now with a global brand. He can simply not allow these moments of madness to ruin his chances of being a better person and getting the bag.

However, with Piriye Isokrari now confirming that Ceeza Milli was lying, then Ceeza Milli deserves to be criticized for lying with his eyes open.